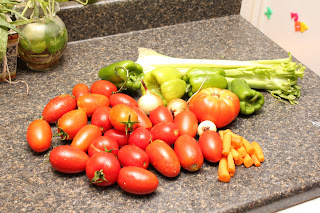 In the past two years I've made a real effort to use all of my garden produce. I have to admit that in the past I did pick, display then throw away, as if growing a garden was just for show! I had good intentions, but I just didn't know what to do with it all. Seventy-five tomatoes can really overwhelm a girl. Especially when you're the only one in the house that eats them!

So now when I have a plethora of garden tomatoes, I put them to good use by canning them or making something I can use later like salsa.

One of those things I like to make with all my garden tomatoes is pasta sauce. I don't follow a recipe when it comes to my sauce, I just make it with what I have on hand and this week it was tomatoes and peppers and other things I harvested in the past two weeks.

Here's what I start with:

The very first step to my special sauce is the tomatoes, which I blanch in hot boiling water. Blanching them makes removing the skin super easy.