Living in Harmony with an xbox 360 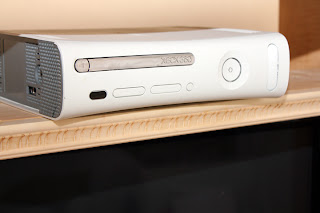 My husband Chris is the whole package. He's dark and handsome (noticed I left the tall part out!) He's a half an inch shorter than me...um, love that!!! I can't stand a man looking down at me! But most of all, he's really intelligent. He says he's a nerd, but I disagree!!
You see my husband is a smart dude. He's the kind of guy who can teach himself anything and does so quite regularly.  He knows a lot about a lot of things, which can be annoying at times. When you're married to a man who is as intelligent as my mine, you're bound to find times when his sheer genius gets in the way of your creativity.
This is a story about one of those times
My little hang up started when he taught himself to repair broken Xboxes. By the way, this is no small feat! It involves taking a malfunctioning Xbox 360 apart, applying silver paste, installing a new cooling fan and some other technical things...truly amazing stuff. Needless to say I was impressed! You'd think that the finished product would be nicely tucked away on one of the shelves behind glass. Well no. The Xbox ended up in the most inconvenient place- On top of the entertainment center! 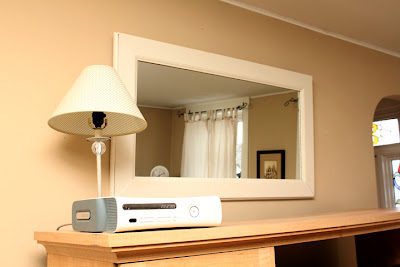 I had just made the mirror a few weeks ago and wanted the top of the entertainment center to be a beautiful showcase for beautiful things...but there was xbox scoffing at me! It knew Chris wouldn't allow me to put the Xbox in the cabinets because of over-heating issues. I asked many, many times, believe me! So I needed to come up with an alternative.
I noticed from the many times I stared at the entertainment center that there was so much room above the TV. Enough room for a shelf! I wouldn't mind if the Xbox sat on a shelf below the my main decorating area. I had three hours until Chris came home from work, so I got busy.

The tricky part was adding the L brackets. The board had to be level, so I measure the left side and attached the brackets.

Once the left side was properly measured and level in it's own right, I leveled and attached the other side. 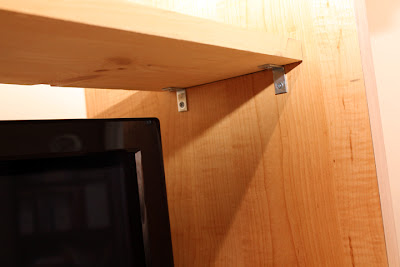 The front of the board was BORING! I solved this problem with some decorative trim I found in the basement. I used wood glued to secure it to the front of the board and screwed it from the sides for extra support. My life depends on Xbox staying on this shelf permanently!! 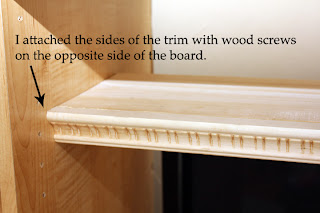 A hour before Chris was due home, I finished the project! Now the Xbox and I can live in harmony. Chris was happy or at least he didn't mind. I'm happy because now I can make the top of my entertainment center pretty. It's a win win!! 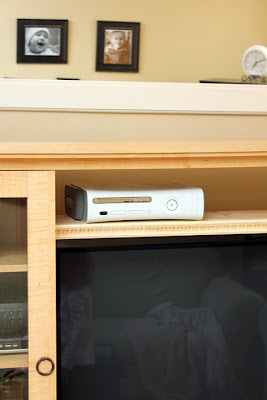 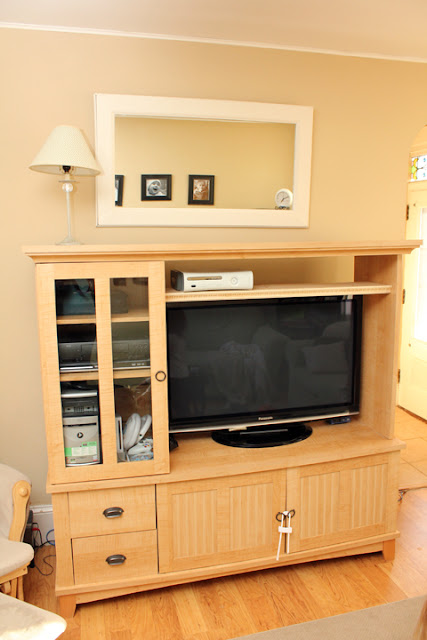 Email ThisBlogThis!Share to TwitterShare to FacebookShare to Pinterest
Labels: how to make a simple shelf, xbox 360